Sleep All Day To Save The Planet...

Right to the point. The absurdity of the global warming hysteria in four simple comic frames.

The nutcakes are once again redefining their propaganda talking points.

April snowstorms across the country, along with one of the coldest Mays in history will destroy even the most well oiled propaganda campaigns, I guess.

In case you haven't noticed, global warming is now out. Climate change is in.

Climate change" is a much better term because much more than warming is involved, although the changes first begin with the globe's average warming. This average warming can cause changes in patterns of rainfall. It can lead to more snow piling up in places such as Antarctica and Greenland, and it can even include some parts of the Earth growing colder.

This allows for an all-encompassing media onslaught. A warm December? Climate change. A cold spring? Climate change. Presto. No more embarrassment of "how's that global warming thingie coming along?" snide comments when it's snowing in April.

Remember the commercial back in the 70's of the Indian crying over how modern man had turned America into a cess pool? This was the original enviro-nazi movement.

Well it's come full circle. The crying Indians are back and siding up with the global warming nuts. Talking Hawk chimes in...

AP: Members of six tribes recently gathered near the Baker River in the White Mountains for a sacred ceremony honoring "Earth Mother." Talking Hawk, a Mohawk Indian who asked to be identified by his Indian name, pointed to the river's tea-colored water as proof that the overwhelming amount of pollution humans have produced has caused changes around the globe.

"Earth Mother is fighting back - not only from the four winds, but also from underneath," he said. "Scientists call it global warming. We call it Earth Mother getting angry."

We took a month or so break from reporting on the absurdity of global warming hysteria. Living here in New England, and being addicted to the game of golf, May and June are pretty much all golf, and some more golf.

Fear not, the evilness of golf, kept me tuned into the enviro-fruitcake movement. I could feel their hate everytime I walked on those plush New England fairways.

Gore Burns 1,800-plus Gallons of Fuel On Trip To Canada For 1 Hour Speaking Engagement (On Energy Conseravation)

Can these people be any more hypocritical?....

Speaks for 1 hour about our need to conserve energy.

And then heads back to Nashville on private jet. (burns another 900 gallons)

Total fuel burned: 1,800 (not including his limo rides to and from airport). For a one-hour paid speech!
Posted by Jeff at 5:32 AM 1 comment:

The mainstream media are reporting it as some mild-mannered disagreement.
Au contraire.
More like triple-teamed. And a full blown assault.
The global warming mafia ( in DC for today's Earth Day concert) attacked Rove, with blows nearly resulting between Earth Day perfomer Tim McGraw, an out-of-the-closet country lefty, and Rove's peeps. Emails have it that McGraw bum-rushed the table after seeing his fellow Earth Day worshippers getting the worst of the pre-planned (see below) ambush. In the midst of the scuffle, McGraw's toupe is said to have come unglued and fallen below his eyebrows. The obviously Where-The-Green-Grass-Don't-Grow McGraw was seen sprinting from the room, followed by wife, Faith Hill. Said one attendee, "McGraw's face was redder than his Indian Outlaw persona... He was totally embarrassed."
Here's a quick briefer: Crow and David, who are on the early-leg of their global warming proapganda tour - which kicked off in Dallas last week amidst the record-breaking cold and snow (in April), ambushed Rove at his table with the intent of harrassment. They were hoping to make a point and then blog about it heroically (e.g. We attacked Rove!). Rove first tried to brush off the insults being hurled at him by David (producer of "Convenient Lie"), but was abruptly grabbed by Crow. It then got nasty, with a loud shouting match ensuing. Rove told Crow, "Don't touch me." Crow yelled, "You work for me." Rove responded, "No I work for the American people." McGraw than attempted to insert himself into the story, as did Rove's posse (and McGraw's aforementioned rug).

Of course Crow and David spun it another way on their blog...

"How hardened and removed from reality must a person be to refuse to be touched by Sheryl Crow?"

Hey, can you blame Rove? Crow is a self-professed enemy of toilet paper. I certainly wouldn't want that smelly enviro-gasbag touching me either. Remember, Ms. Crow wrote this about the evils of toilet paper on the HuffPo...

I propose a limitation be put on how many squares of toilet paper can be used in any one sitting. Now, I don't want to rob any law-abiding American of his or her God-given rights, but I think we are an industrious enough people that we can make it work with only one square per restroom visit, except, of course, on those pesky occasions where 2 to 3 could be required.

Can you believe these people? One square of asswipe per dump. Is that double or single ply, Sheryl? Is there any wonder why Lance Armstrong dumped this aging hippy chick? I think they even allow a couple to three wipes of the ass in communist Cuba and China. These people are truly insane.
Posted by Jeff at 12:10 PM 5 comments:

Pro-global warming scientists are reporting that if you microwave a lizard's egg to around 99 degrees, a male baby lizard may hatch with female characteristics... Does this explain all the gay metros on South Beach?

Nearly 100 percent of the eggs incubated at intermediate temperatures developed into lizards with genes that matched their physical features. However, about half of the lizards from high-temperature incubators had a mismatched make-up, in which genetic (DNA) males "looked like" females.

After burning tons of fuel by JetBlueing to LAX, and then humping over to your carbon-inducing hotel via a gas-guzzling limo (or cab), you can then table up with Mr Ford for a carbon-neutral lunch. Sit down, relax and discuss how the world is coming to an end -- thanks to all the evil humans burning up Mother Earth.
Posted by Jeff at 8:33 AM 1 comment:

John Stossel does a nice job of debunking some of the leftist-driven global warming hysteria.

He even points out the absurdity we linked to earlier this week regarding the indoctrination of the youth via WaPo. Here.

But here's the best grab...

In 2000, a group called Cape Wind proposed to erect 130 windmills in Nantucket Sound, off the coast of Massachusetts. I think the drawings make them look interesting, but -- horrors! -- they would be visible from the Kennedy family vacation compound in Hyannis Port. Robert Kennedy Jr., grand poo-bah of the environmental zealotry movement, is leading a campaign to ban the windmills from Nantucket Sound. The group he leads, the Waterkeeper Alliance, said it supports wind farms -- but Kennedy fights the one near his home. What a hypocrite.

We knew this was coming... And the ridiculousness continues.

A UK company has introduced a solar-powered grill. The hi-tech design is your basic bathroom mirror, bent at a 45 degree angle.

With forecasters predicting a long scorching summer for the UK, millions of us are expected to leave bigger carbon footprints by cooking over coals. But a new barbecue lets environmentally-conscious cooks enjoy grilling their food outside without feeling guilty about global warming.

A couple of immediate red flags: A.) What happens to my halfway-done steak tips when the clouds come barreling in and cover the sun? B.) Would anyone dare show up with this contraption at an NFL tailgate party any time soon?
Posted by Jeff at 8:27 AM 2 comments:

The absurdity continues... We know the theory behind the global warming charade is that human's are destroying Mother Earth. So it should come as no surprise that the enviro-alarmists are now introducing the idea of "population stabilization" as way to help the environment. You can't make this up.

"If we had half as many people, we wouldn't have much of a climatic warming problem," argued Ric Oberlink, a spokesman for Californians for Population Stabilization.

It should be noted that "population stabilization" is basically leftist code for more abortions, condom distribution (in schools) and gay marriage.
Posted by Jeff at 8:01 AM No comments: 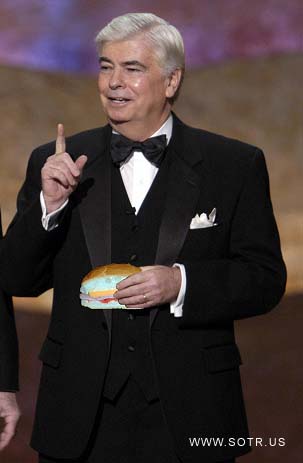 We here realize that the global warming hysteria is nothing but a ruse by the radical left for global taxation, and bigger government - bascially socialism. It is a constant uphill battle to warn the masses - many of whom view it as a harmless feel-good movement (i.e. recycle a little more, conserve a little electricity, plant a few shrubs, etc).

But sometimes we get handed the hard, end-goal evidence on a silver platter. This time on a silver waitress sandwich platter. Our favorite liberal blowhard, south of Kerry/north of Biden, Senator Chris Dodd, aka Senator Waitress Sandwich, provides today's point.

Headline: Dodd calls for a carbon tax on businesses (who'll pass costs on to consumers).

And the Dems wonder why jobs are being outsourced and consumers are being screwed.
Posted by Jeff at 6:36 AM No comments:

Patrick replaced the old incandescent bulbs in his office for the so-called energy-efficient fourescents. Natch, he did it with help of Globe photographers and youth volunteers (see photo).

"In my administration, we intend to practice what we preach," Patrick said in a statement.

Meanwhile back in reality: Patrick owns two huge homes - one a brand new, 24-room mansion, replete with inground heated pool, and tennis courts, which required the destruction of acres and acres of trees, nature and wildife (see above). Not to mention the use of gas-guzzling construction equipment needed to build this Carbon Bigfootprint mansion.
Posted by Jeff at 5:20 AM No comments: